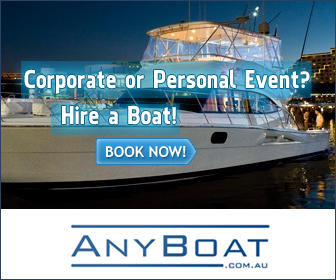 Sydney is known worldwide as party central on New Year’s Eve, not just because of the fantastic fireworks display but also the exhilarating party atmosphere. Approximately 1.5 million people make their way to Sydney Harbour on New Year’s Eve so things can get a little crowded. And you have two choices: you can stand on the foreshore with a million other people, enviously watching the rich folk getting the best spot on the harbour in their boats, or you can be one of the rich folk on-board a magical cruise being part of all the excitement rather than standing on the sidelines just watching it.

If you want to enjoy the best New Year’s eve possible, the only place to be is on a new years eve cruise on Sydney Harbour, so contact AnyBoat.com.au and let them find the right cruise for you. We all know how spectacular the fireworks displays are but imagine having the best view possible, right there on the harbour, completely amongst all the magnificence. The eyes of the world will be on you as Sydney is almost half a day ahead of the rest of the world, and you will be one of the first people in the world to welcome in the New Year.

Everyone knows Sydney puts on amazing fireworks displays but what about the Harbour of Lights Parade, or the Opera House and the city skyline lit up especially for the occasion? Many people don’t even know about these things because they’ve only watched from the foreshore and can’t appreciate the beauty of the Opera House lit up with laser lights or the thrill of being part of the Harbour of Lights Parade. These things can best be admired from a boat on the harbour while dancing and drinking the night away, and AnyBoat boat charter is the perfect place to hire a boat to suit your dream New Year’s Eve party. They have over 50 boats available for New Year’s Eve hire ranging in all sizes and with all types of services. You can hire a boat for your own exclusive use and watch the extravaganza from the deck of a chartered yacht or you can hire an experienced skipper and sit back while someone else does all the work.

If you are wanting to charter a boat for a larger party, if you all chuck in you may well be able to afford to hire a boat for your party’s exclusive use. Normally there is an overall price although some boats charge per person, so make sure to phone AnyBoat and their friendly and helpful staff will help you to find the boat that is right for your needs, because there are many options to choose from. Some boats are fully catered or you may be able to arrange to bring your own food and this also goes for the alcohol, it can all be arranged beforehand so that when you get on board your drinks will be ready on ice waiting for you.

The boats are staffed with friendly crew who really know how to see in the New Year in style and they know all the best viewing places in the harbour. Many of the staff specialise in corporate hospitality and you will be treated like a VIP. This can include 5 star catering with an onboard chef as well as bar staff to serve you the best quality Australian wines and sparkling French Champagne to toast at midnight.

Another option is to attend a ticketed party on board a boat with other guests.

These new years eve cruises usually include all food and drinks for the night as well as a DJ or a band, although there are some BYO options available as well. Most of the cruises go for 6 hours starting at 7pm and finishing at approximately 1.30am. Extra time may be available at an extra pro rata charge. Make sure that you find out what you get for your money as some boats only take you to one fireworks display and you want to make sure you get them both, as well as seeing the Harbour of Lights Parade. Even better, try to get on a boat that is part of the parade so that you can be inside the exclusion zone and have a first class view of everything.

Many boat are allowed into the exclusive viewing zone with some boats even being official boats in the Harbour of Lights Parade, which goes from 9.15 – 11.30pm. So if you would like to be amongst all the excitement, make sure to phone AnyBoat and book well in advance.

Or maybe you would like it to be a little more formal and enjoy a party on a really large boat with a live band, a la carte dining, vintage wines, all spirits and liqueurs, and Veuve Cliquot Champagne at midnight. These cruises are also available for New Year’s Eve so phone around and find the best deals. But as you can imagine, these are very popular cruises because everyone wants to be close to the action, so the earlier you start planning the better.

But it doesn’t have to be a luxury yacht. There are places where you can hire a boat for as few as 2 – 4 people and these too can be a lot of fun. And even small boats offer a buffet and alcohol.

Naturally, all the people on the foreshore (1.5 million of them) see what a great time and what a fantastic view people on the boats have and many decide to book for next year on January 1st so that they know for sure they won’t miss out the next year, so it’s never too early to book, only too late.

This year’s theme for the Parade of Lights is Embrace; embrace love, embrace Sydney, embrace possibilities and embrace the moment. But most of all you should embrace the harbour and get yourself on a boat for this year’s New Year’s Eve spectacular, the best in the world.